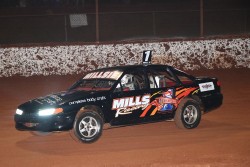 This Saturday night at the Bairnsdale Speedway, the Victorian Production Sedan Title will be held, just two weeks before the National Title is held at the Western Speedway Hamilton.

National Champion, Trevor Mills, heads the line-up, as the defending and three times Victorian Champion, with drivers from Western Australia, New South Wales, Queensland and the Australian Capital Territory all joining the Victorian contingent for the event, which will give a great guide to the National Title.

Stephen Laidlaw and Adam Wilson, who both have won the State Title before are also in the twenty five car field.

West Australian, Beau Riley has won four Feature Races this season at his home track, the Collie Speedway, all in large fields, and is sure to be prominent at the Bairnsdale venue.

Craig and Damien McAlister are also in the line-up and are always highly competitive, and is Wayne Bourke just to name a few, guaranteeing a great night of racing.

Mills, Laidlaw and Queensland based Tim Atkin have all won the event three times, with Mills and Laidlaw looking to become the first driver to win the event for a fourth time.