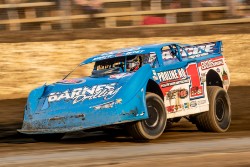 Matty Pascoe, the National Champion, finished the season as the highest pointscorer, with Wayne Randall and Bob McCosker finishing second and third respectively.

Pascoe was not in attendance at the function, as he was attending the Speedway Australia Awards night in Adelaide, where he was named Sedan Competitor of the Year.

It was also announced that next years series would be known as the McCosker Contracting Super Sedan Series.

Thanks to the Series Sponsors: