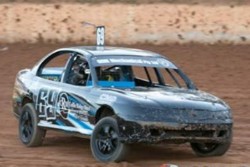 One of the biggest Street Stock events in the Pilbara region of Western Australia will be held this weekend and with a stout 44 car field, it is set to be a huge event.

The sixth annual running of the Brett Johnson Memorial has attracted competitors from all over the State to Karrathas Nickol Bay Speedway, as well as two Northern Territorians and the Australian Street Stock Champion Anthony Beare.

This will be Beares first appearance at Nickol Bay Speedway where he will be driving the Craig Clayton/Samantha Dodd owned machine, while Justin Brumfield and Jorj Park will be representing the Territorians.

Defending and two time champion Paul Joss all the way from Collie headlines the WA based part of the field which also includes current WA Street Stock Champion Jack Barnewall from Kalgoorlie in his first BJM event and former WA champion Wayne Thomson who has again made the trek up from Bunbury for the fourth time.

The southern half of WA has seen a number of competitors making their way up North: Margaret River has a good representation with five competitors including Clint Hadley and Joe Wilson while Ellenbrook will see names like Josh Martinelli and Evan Wakefield competing.

Not to be outdone, the North of WA has drivers like Russell Gunn from Kununurra and Rowan Drysdale from Derby also making the journey to join the cast of around ten local cars, with other northern clubs being represented including Carnarvon, Broome, Newman and Port Hedland.

Incredibly, this is just the sixth running of the event with car numbers rapidly increasing every year: last years event attracted twenty nine cars while this year there is no less than 22 drivers, or exactly half the field, making their first appearance in the BJM event.

The event is held in honour of Brett Johnson, a young man who upon birth had medical issues which would continue throughout his short life. In 2013 Brett was given the opportunity to come out to the Nickol Bay Speedway Club where he had a ride in a two seater Street Stocks, something that he would never forget. Sadly, Brett passed away later that year and the Brett Johnson Memorial was held for the first time in 2014.

It is because of this connection that the event also supports EPIC, a well-established not-for-profit organisation which provides a range of services and programs in the Pilbara including disability support, parenting & resilience programs, school and community-based programs as well as pre-employment support. The kids from EPIC will come out to the track this Friday and Saturday night for the two night event, with the kids getting the opportunity to go around the track in the two seater Street Stocks where their smiles light up the track!

Full coverage of the event will occur this Friday and Saturday nights, with results posted as they happen on the SSWA Facebook page, race monitor to be up and running and all the usual articles posted each night, while there will also be an event live stream available via the Dirt Track Nutters Facebook page.