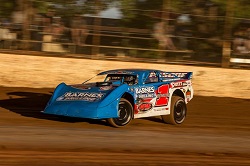 The forty fifth running of the Super Sedan Grand Prix is set to take place this Friday & Saturday Nights at the Gulf Western & Independent Oils Raceway located in Latrobe Tasmania.

Thrity One Super Sedans are scheduled to sign in as they chase the five figure first place prize on offer at one of the spiritual homes of Super Sedan Racing in Australia.

The Grand Prix kicks off a big five nights of competition on the Apple Isle with events to follow at the Cranes Combined Carrick Speedway and Solo Hobart Speedway next week.

Matt Pascoe has been virtually unbeatable to start the season in his home state aboard his Sweet Chassis house car with fellow Queenslander Sean Black also showing plenty of car speed in the Sunshine State.

Multiple National Champion Darren Kane will be looking to find some form at the tracks he grew up racing at in his IBRP Dominator Q36 with Rockhampton's Matt & Leigh Williams also making the trip south.

Super Sedan competition in Tasmania has been white hot in the first half of the season with Steve Latham, Adam Beechey and David Nichols already finding victory lane.

SSA Street Stocks and SSA Modified Sedans are apart of the support program on night one with SSA Junior Sedans joining the card on night two.