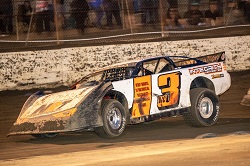 Multiple National Super Sedan Champion Mick Nicola has continued his winning ways in the 2019/2020 Victorian Super Sedan Series after taking the chequered flag during round five held at the B & S Earthworks Timmis Speedway last night.

Nicola inherited the lead on lap thirteen from the V0 Insane Chassis of Lucas Roberts after the multiple Victorian Champion was forced to retire with a driveline issue.

A lengthy delay occurred on lap sixteen when Neville Nitschke and Kym Leyson got hooked together on the back straight.

South Australian Jason Gantz tried everything to find a way past Nicola in the concluding stages of the thirty lap A Main with the veteran equal to the challenge.

Nicola held on to win his third successive main event with the Victorian domestic series this summer with Gantz and Kym Hammerstein rounding out the podium.

In other racing on the night David Smith was the class of the field in the SSA Modified Sedans with Chelsea Gwynne successful in the SSA Junior Sedans twelve lap main event.

Daniel Drewett defeating a solid field of SSA Street Stocks with the class building towards some big events in the coming months.

The next major event for SSA Super Sedans in the region will be the South Australian State Title to be held at the Borderline Speedway in Mount Gambier on Saturday 22nd February 2020.