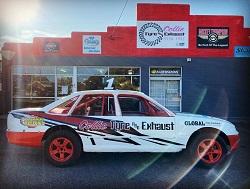 Twenty Six competitors will make the trip to the Victorian South Coast tourist town of Portland this Saturday night to compete in the SSA Production Sedan Victorian Title with Beau Riley travelling the furtherest, a mere 3000 plus kilometers from his home town of Collie in Western Australia.

Also headlining the cast of drivers is current National Champion Joel Berkley from Oakhurst in Queensland. Berkley has been out of his usual top form in the past few meetings and is hungry for a win at the moment.

The fast, hooky bull ring at Portland known as Southern 500 Speedway may give the local competitors the upper hand of knowing the track thoroughly and the likes of John (Moldy) Calderwood, Pete Leonard, Stefan Clark, Steven Aldridge, Billy Williamson and Jordan Ellifson will all be banking on using that knowledge to their advantage.

As well as attracting drivers from Western Australia and Queensland, the event will also have a good contingent of drivers from the Production Sedan heartland of New South Wales. The posse heading down from over the border are made up of Trevor Mills, Matthew Hutchison, Scott Hawkins, Justin Hawkins, Wayne Bourke and Brendan Harper.

Trevor Mills of Corowa and Stephen Laidlaw of Churchill have both previously won National Titles in SSA Production Sedans and are both currently sitting at three a piece for Victorian Titles with both of them keen to break this tied result and claim the bragging rights.

The sole South Australian entry Jayden Edwards was a last minute decision and comes in as a late entry to the field but has had mountains of experience racing at Portland although most of it comes from piloting a SSA Junior Sedan there in the past with good success.

Add the contingent of ladies bringing the challenge on including Hamilton's Shona Bent, Zoey Salau from Swan Hill and Gemma Laidlaw from Churchill and then include the boys from Horsham young Ryan Queale at the age of eighteen and his Club counterpart Graham Gerlach.

We also have the drivers from nearby Hamilton making the trek including Current Australia 2 Dehne Sparrow in the immaculate Holden Torana, Ryan Arnel in his EF Falcon and Ben Barker in a very nice VZ Commodore.

Add to this a spattering of drivers from the Northern parts of Victoria Raymond Usher and Brendan Harper from Waldara and Bright respectively and it will make for a very exciting night of racing.

So with such a vast array of drivers from varying parts of the Country it looks an open book and certainly hard to pick a favourite.

Racing starts from 6 pm at Southern 500 Speedway, Portland located on the Henty Highway just outside Heathmere.