QLD STREET STOCK TITLE SET TO BE A RIPPER 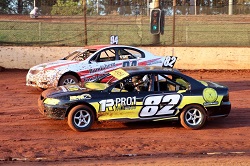 The eighth running of the SSA Street Stocks QLD State Title is scheduled for this Saturday Night at the Fraser Shores Maryborough Speedway.

Four Victorians and Jayden Edwards from Mount Gambier in South Australia are making the long haul to the Hervey Bay region of Queensland to take on the locals in their own backyard.

Defending champion Matt Nelson will have his work cut out trying to defeat such a quality line up that includes former QLD Champion Robert Trapp.

Victorian Jayden Blomeley recently won at Kingaroy so has proven he knows how to win on the unique Queensland racetracks.

Racing gets underway at the earlier time of 4pm Saturday with the third round of the IBRP SSA Production Sedan Series and SSA Junior Sedans also on the program.

Image by Darrell Lockhart of the SSA Street Stocks in action at the Fraser Shores Maryborough Speedway recently.