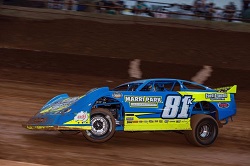 The fifth round of the WA Super Sedan Summer Series is the main support act for the twelfth round of World Series Sprintcars this Saturday Night at the Make Smoking History Bunbury Speedway.

In what will be a great sight for the Speedway community in the west, Dustin Higgs makes his long awaited return to the drivers seat aboard the Adrian Geary owned W38 Sweet Chassis.

Western Australian Champion Chris Pavlovich along with Busseltonĺs Kevin Bell have been the drivers to beat this season and will relish having the two Higgs entries to come up against.