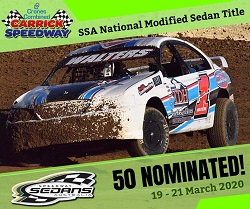 A field of 50 Modified Sedan drivers are set for the 46th running of the SSA National Modified Sedan Title. The event will be held between 19 and 21 March 2020 at Cranes Combined Carrick Speedway in Tasmania.

Defending national champion Kye Walters leads the list of nominations fresh from his remarkable win at this seasons Kings Royal. He will be joined by a host of former national champions including Greg Worling (1998), Justin Drew (2006), David Smith (2012), Aidan Raymont (2013) and 2018 National champion and Supercar driver Cameron Waters.

Then theres at least another 10 - 15 drivers that are all genuine changes to win the record equaling National Title being held on the Apple Isle. Providing all 50 drivers turn up, that number would equal the 2010 National Modified Sedan Title held at Latrobe that also had 50 starters.

As always, every racing lap will be live streamed on SSA Live powered by Pro1 Race Parts courtesy of Ash Media.