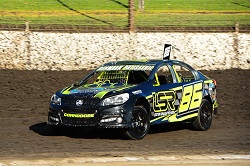 After a great two night show last weekend in Mount Gambier where the series played support to the 2019/2020 SSA National Super Sedan Title, the series grand final promises to be a great show.

The Heinrich brothers put on a great show in Mount Gambier with Bailey coming out on top in the main event.

SSA Junior Sedans are also on the program who have enjoyed a great season in South Australia.